Fluorescence imaging in the near infrared region I window (NIR-I, 700-900 nm) has shown significant advantages including high spatial and temporal resolution, and is expected to play important roles in clinical diagnosis, guiding surgery and so on. At the same time, recent advances in optical imaging show that imaging detection at the near-infrared region II window (NIR-II, 1000-1700 nm) can significantly improve the quality of in vivo imaging, including centimeter level tissue light detection, micron-level resolution, and high contrast between target and background in real-time imaging. This is mainly attributed to the reduction of tissue autofluorescence in the NIR window, reduced photon scattering and low-level photon absorption at longer wavelengths. 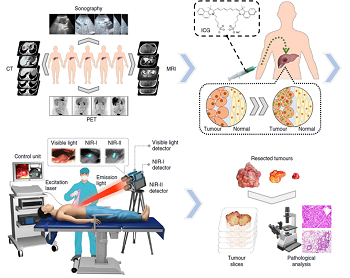 However, although a variety of NIR-II optical probes including nanoparticles, organic polymers and small molecules have been developed, NIR imaging has not yet been tested in clinical Settings due to the lack of suitable imaging instruments and optical probes.

On December 23, 2019, A team led by Tian Jie, Key Laboratory of Molecular Imaging, Institute of Automation, Chinese Academy of Sciences, published the edition of First-in-human Liver-Surgery Guided by multispectral in the journal Nature Biomedical Engineering Fluorescence Imaging in the visible and near-infrared-I/II Windows, introduced an integrated visible light and NIR-I/II region multispectral imaging instrument combined with indocyanine green dye (ICG) for fluorescence imaging. For the first time, surgical resection of primary and metastatic liver tumors was performed in 23 patients with liver cancer. The imaging performance of the NIR-I window and the II window in each patient was compared. The authors concluded that the combination of NIR-I/II spectral window and appropriate fluorescent probe might improve the current situation of translational image-guided surgery.

To apply the NIR-II imaging method to the clinic and to understand and evaluate the advantages and limitations of this optical region over NIR-I imaging, the research group constructed an integrated visible and NIR-I/II multispectral imager covering the spectral range from 400 to 1700 nm. The imager is composed of two sets of laser excitation equipment and three subsystems of NIR-II region imaging, NIR-I region imaging and visible region imaging, which can be conveniently placed in the operating room for clinical use.

To investigate the performance of the developed imaging instrument, imaging standards and tumor-bearing mice were used, and an animal model of tumor resection was performed under image guidance. Firstly, both NIR-I and NIR-II imaging clearly distinguish three standards. When the sample was covered with chicken breast tissue of a thickness of 2.0 mm, it was still clearly imaged and resolved. However, when 5.0 mm breast tissue was used, imaging of the NIR-I region failed to distinguish, whereas imaging of the NIR-II region was still able to distinguish between the three sources.

The results confirm that the optical resolution of NIR-II region is higher than that of NIR-I region, which reflects the higher optical resolution of NIR-II than NIR-I region. The surprise was that NIR-II imaging was able to distinguish between the three sources of the standard when using 8.0 mm chicken breast tissue as a covering. Quantitative analysis showed that the fluorescence intensity and signal background ratio (SBRs) obtained from NIR-I and NIR-II decreased with the increase of imaging depth, and the SBRs of NIR-II was always significantly higher than that of NIR-I.

Nir-i and NIR-II imaging tests were performed in subcutaneous HepG2 tumor bearing mice. Both NIR-I and NIR-II imaging showed ICG accumulation in tumor and liver with good contrast. The tumors in both groups were subsequently removed under the guidance of fluorescence imaging. Quantitative analysis in the mouse model showed that the NIR-I and NIR-II signals in the tumor region and the ratio of tumor to normal tissue (TNR) were significantly decreased after resection. Meanwhile, the liver SBRs (liver to skin signal ratio) obtained by preoperative and postoperative NIR-II imaging were significantly corresponding to the SBRs obtained by NIR-I imaging. The results further confirm that NIR-II has higher optical resolution than NIR-I.

A multispectral imager was used to examine the liver surface of patients with liver cancer (n=23) to obtain visible light, NIR-I and NIR-II image information. Tumors can be identified in visible images. Nir-ii imaging is almost not affected by operating room lighting, while NIR-I fluorescence is strongly interfered and cannot be distinguished under indoor lighting. Lighting must be turned off to obtain clear NIR-I tumor images.

For patients with typical extrahepatic metastases, NIR-II and NIR-I imaging during open surgery can show metastases in the omentum and peritoneum, but preoperative CT and PET imaging cannot detect these metastases. The combination of intraoperative NIR-II and NIR-I fluorescence imaging detected extrahepatic metastases that had been overlooked by the preoperative pattern, a finding that could greatly facilitate the diagnosis of patient staging and change of treatment.

First, doctors performed visible light and NIR-II imaging with a multispectral imager to determine the location of the tumor. Under the guidance of ultrasound examination and visible light images, the tumor was completely removed. Intraoperative ultrasonography showed no residual tumor tissue, whereas NIR-II and NIR-I imaging still detected residual tissue fluorescence. Doctors then excised the fluorescent sites based on the NIR-I images. Visual inspection showed no residual tumor tissue, and optical imaging showed no fluorescence of NIR-II or NIR-I in the remaining tissue. 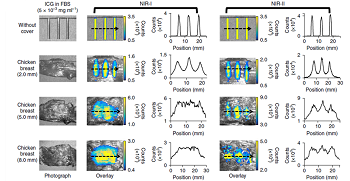 Imaging analysis was performed on the twice resected tissues. After the first resection, the NIR-I and NIR-II signals in the tumor area did not change obviously, but after the second resection, the fluorescence signals of them decreased greatly. H&E staining showed that both resected tumor tissues were HCC. The results showed that both intraoperative NIR-I and NIR-II imaging detected residual HCC that was not detected on visual inspection or intraoperative ultrasound. Nir-ii imaging has also been shown to have the ability to outline lesions missed by NIR-I imaging during image-guided resection.

Overall, the difference ratio between tumor signal and normal tissue signal/background was much higher on NIR-II imaging than on NIR-I imaging in both in vitro and in vivo studies, which explains why NIR-II imaging performed better than NIR-I in identifying lesions.