What is the specific effect of carnosic acid?

Carnosic acid is a stable (anti-high temperature) and safe side effect oil-soluble antioxidant and green food additive.Medical research shows that it can eliminate excessive free radicals in the human body,destroy single oxygen, protect the structure of cell membranes,and slow down human aging.Through antioxidant activity,it can stimulate and accelerate the body's fat metabolism,not only can, but also can promote the effect of lipid compounds excreted from the feces, to achieve the effect of weight loss.

What are the fields of application (uses) of carnosic acid? 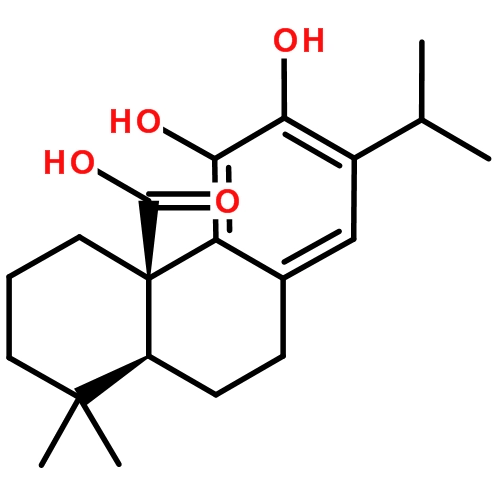 Carnosic acid CA is used in meat products,deep-sea fish oil,oral liquid,oil,seafood,pet food,candy and other food industries.It can prevent and delay product oxidative deterioration,improve food taste and extend shelf life.In Europe, carnosic acid CA is used to prevent the oxidation of sausage and ham products; in Japan,carnosic acid CA is used in fried food to prevent light deterioration after packaging,and can also be used in frozen food to remove fishy smell.Reported that adding 0.03% rosemary antioxidant to peanut oil has strong antioxidant properties at 150 °C, and compared with the antioxidant capacity of traditional synthetic antioxidants PG and BHA,The results showed that rosemary antioxidant > PG > BHA; treated yellow croaker with chitosan and rosemary extract at the same time,and found that rosemary extract could significantly reduce the number of viable bacteria in meat products and prolong the shelf life of yellow croaker Period, used licorice.The extracts of cloves and rosemary prolong the shelf life of soy sauce,achieve antibacterial and antiseptic effects,and endow soy sauce with a special fragrance added the active ingredient carnosic acid CA to deep-sea fish oil,and used gas chromatography- Mass spectrometry was used to analyze and monitor the changes of polyunsaturated fatty acid content in the storage process of fish oil.The results showed that carnosic acid CA could effectively inhibit the oxidation of fish oil during storage,and there was a dose-effect relationship.

The Institute of Botany,Chinese Academy of Sciences successfully introduced rosemary plants from abroad in 1981.After extracting rosemary essential oil from rosemary leaves through supercritical carbon dioxide,it was further separated to obtain rosemary antioxidants.Studies have shown that the antioxidant has anti-HIV-1,anti-tumor,anti-hepatitis,liver protection,anti-inflammatory,antibacterial and other activities,so it has anti-inflammatory,anti-cancer,anti-AIDS,liver protection and enzyme reduction and therapeutic properties.Potential for drugs such as cardiovascular disease.In the field of pharmaceuticals and cosmetics,antioxidants can hinder the development of the oxidation reaction chain to delay the oxidation process,thereby achieving anti-aging effects.

Rosemary can significantly reduce the restless time of mice,and has an effect on the central nervous system,and it is expected to be developed into an antidepressant in the future.There are also some studies that claim that rosemary essential oil has the effects of relieving joint pain and refreshing the mind, which is the embodiment of aromatherapy.The diterpenoids in the rosemary plant have a strong inhibitory effect on HIV-I protease activity,among which the diterpenoid carnosic acid CA has the strongest activity and can significantly inhibit the replication of HIV virus.Studies have shown that anti- The activity of HIV is closely related to the ortho phenolic hydroxyl group in the CA structure of carnosic acid,and it is expected to be developed into a new type of anti-AIDS drug.

Carnosic acid CA can be used in sunscreens and isolation creams,which can protect the skin from ultraviolet rays,computer radiation,high temperature,etc. The accumulation of peroxide and other oxidation products in skin tissue is used to delay skin aging and prevent skin diseases.Carnosic acid CA,due to its superior antioxidant properties and pure natural advantages,can promote the blood circulation of the skin in the human body,strengthen the expansion and contraction of blood vessels,and inhibit the degradation of elastin,so as to ensure the luster and luster of the skin elasticity.Today,when advocating natural, additive-free and green,carnosic acid CA is gradually applied in high-end cosmetics

What are the precautions for using carnosic acid?

2. It is not suitable to use this product under alkaline conditions.

3. Make sure to mix well when using.

2. Eliminate blood stains and other parts of the blood after acne healing.

Carnosic acid is the main active ingredient of rosemary antioxidant approved for use in my country.As a fat-soluble natural antioxidant,carnosic acid is far superior to synthetic antioxidants in terms of stabilizing oil. Can be used in oil and fat-containing food,biomedicine,chemical industry,cosmetics and feed,etc., in addition to preventing or delaying the oxidation of oil or oil-containing food, improving the stability of food and prolonging the storage time of storage,it can also be used as meat and seasoning for fish.In Japan, rosemary extract is used in high-temperature fried foods to prevent oxidation effects and prevent photodeterioration after packaging, and can also be used in frozen foods to suppress fishy smell; in Europe.Rosemary extract is also used to prevent oxidation of ham and sausage products.A new diluted seasoning oil product with rosemary extract is applied,which is very suitable for meat products.After years of research,Microherb has successfully separated high-purity carnosic acid (Carnosicacid) and rosmarinic acid (Rosmarinic acid) with a content of more than 90% by using modern Chinese medicine extraction technology and advanced chromatographic separation technology for pharmacological, toxicological and clinical applications.Applied experimental research and widely used in medicine and health care and daily chemical industry.Use Carnosic acid is a natural antioxidant ingredient extracted from the plant rosemary.As a raw material for skin care products,it has long been sold in European and American countries

Population aging is a social problem that cannot be ignored.With the increasing aging,the incidence of neurological diseases (such as Parkinson's disease, Alzheimer's disease,stroke and other senile diseases) is also increasing year by year.Medicinal plants Carnosic acid,the main diterpenoid in rosemary, plays an important role in neuroprotection,offering hope and more options for the prevention and treatment of neurological diseases.