What is epimedium extract?

What is Epimedium extract?

Epimediumbrevicornum extracts are processed from the dried stems and leaves of Epimediumbrevicornum, etc. The commercial extracts have many specifications, usually with icariin or total flavone as the standard index. It has androgen-like Chemicalbook effect, which can improve the body's immunity, reduce blood pressure, and inhibit the infection caused by Staphylococcus aureus and poliovirus. There are antitussive, expectorant and antiasthmatic effects. 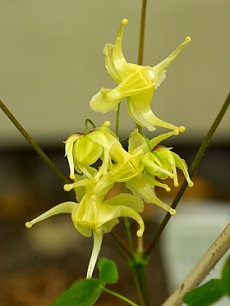 What are the sources of icariin extract?

There are about 30 species of Epimedium in Berberaceae in the world and 20 species in China, all of which are endemic in China except for North Korea. Chinese epimedium producing in many places, mainly produced in Shaanxi, Shanxi, Gansu, Anhui, Hunan, Hubei and other places. Epimedium stems cylindrical, about 20 cm long, yellowish green or pale yellow surface, shiny. Cauline leaves opposite, two back three compound leaves; Chemicalbook leaflet ovoid, 3 to 8 cm long, 2 to 6 cm wide; Apex apiculate, terminal leaflet base cordate, leaflets smaller on both sides; Partial cordate, lateral larger, auricular, margin with yellow bristle serrate; The upper surface is yellowish green, the lower surface is grayish green, the main veins are 7-9, the base has sparse fine long hairs, the veins are two protrusions, the reticulate veins are obvious; Petioles 1 to 5 cm long. Leaf blade subleathery. Odorless, slightly bitter taste.

What is pharmacological action of epimedium leaf extract?

i. Effects on sexual function

Epimedium has a stimulating effect, which is caused by the hypersecretion of semen and the stimulation of sensory nerves after the seminal vesicle is full, and the indirect stimulation of sexual desire. The fluid extract made from Epimedium or Epimedium japonicum could not show tail lifting response in dogs, but it could promote semen secretion. The strongest effect was in leaves and roots, followed by fruits, and the weakest in stems. It was proved that the extract of Epimedium had androgen-like effect by increasing the weight of prostate, seminal vesicle and levator ANI muscle (mice).

The effect was weaker than that of Cichnoides, but stronger than that of Eosophila and hippocampus. Injection of 20~40 mg of the extract was equivalent to 7.5 micrograms of testosterone. The results of Epimedium decoction in mice with bilateral ovaries removed showed that it had no effect of estrogen, and had no effect on the mating rate of rats, ovulatory cycle, and the excretion of estrogen in urine of rabbits. The results of hot and cold water immersion were the same. The ethanolic extract of Epimedium had no effect on the sexual cycle of normal and ovariectomized female mice, and did not increase the weight of uterus and ovary.

Epimedium decoction had a significant inhibitory effect on poliovirus in the test tube, which showed inactivation within 1 hour of contact with the virus, and also could inhibit other enterovirus. It has significant antibacterial effect on Staphylococcus albicans and Staphylococcus aureus, and has mild inhibitory effect on Catarlococcus neisseri, diplococcus pneumoniae and Haemophilus influenzae. The 1% concentration has bacteriostatic effect on human mycobacterium tuberculosis.

Among the various preparations of Epimedium, the fresh extract C of stem and leaf and the compound ⅱ of Epimedium (Epimedium: Eucalyptus leaf: Aureus aureus =8:2:1) have certain expectorant effect (mouse phenol red method), and the ethyl acetate extract is preliminarily believed to have antitussive effect (mouse cough induced by SO2 method), but the antiasthmatic effect on guinea pig bronchial asthma is not ideal.

The extract of Epimedium has antihypertensive effect on rabbits, small amount can increase urine secretion, but large amount can inhibit it. It has inhibitory effect on isolated rabbit intestine, isolated uterus is first excited and then inhibited. Oral administration can decrease blood glucose in hyperglycemia rats, Epimedium contains vitamin E(chicken identification method).

What does icariin 98 do?

i. The immune system

Epimedium can affect aging mechanism in different ways, which can delay aging process and prevent senile diseases. Such as the influence of cell passage, prolong the growth period, regulate the immune and secretion system, improve the body metabolism and organ function.

iii. Folding on the cardiovascular system

The extracts of Epimedium can reduce cerebral vascular resistance, and have a certain protective effect on myocardial ischemia caused by pituitrin, which has scientific basis for the treatment of coronary heart disease and angina pectoris.

iv. Folding acts on the blood

Experimental results show that Epimedium can promote the synthesis of DNA in bone marrow cells, and has the effect of "psorbous bone", which has a good effect on the prevention and treatment of osteoporosis.